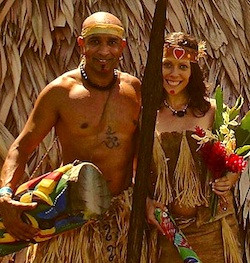 Custom Built for each other

I’m a chiropractor and facilitator of Access Consciousness. A patient told me about your site in 2009, and I created a profile and then forgot about it. I closed my practice in Arizona in 2010 and moved to Portugal to buy a chiropractic office, only to realize 4 months later that it wasn’t going to work out. I was like most entrepreneurial women out there – no time for dating, business was first.

Using the tools of Access Consciousness, I did become extremely clear about what I desired and required from a partner, and also what I didn't desire and require... and I kept refining that list with every man who showed up who didn't meet 100% of that list.  I demanded that I wasn't going to settle for less... then Kumar sent me an email on your site in July 2011. Our first date was a 2.5 hour conversation that ended with a 10 minute hug – wow, he actually knew HOW to hug.

On the second date, I invited Kumar to one of my free intro workshops where I teach people how to change wine using their own healing capacities (hidden agenda to see if he was on my level playing field for the consciousness work I facilitate, haha) and little did I know he would contribute to the last portion of the class for me.

The third date was a double date for dinner with his close friends, and then came the fourth date that changed everything! He invited me over for dinner and due to seeing clients an hour and a half away, I didn't show up at his door until 11:30 pm with prior communication that there were no sexual expectations if I came over. I was drawn to go over, despite the time or obligations I had the next day.

I walked in, asked if I could shower, and we fell asleep cuddling each other. Our bodies woke up abruptly at 2 in the morning ravishing each other for at least 3 hours. The next morning I was astonished and amazed and in awe of Kumar.  He was unlike any other man I’ve dated.  A lot of “energetic” things occurred for us over that week… I remember telling him that on that next day, I felt things “click” into place in my universe, in my body, and on a much larger scale than I could perceive.  It’s a bit hard to describe what I actually felt.  We had other interesting energetic experiences that week as well – one that sticks out in my memory very well: we woke up at the same time with my body moving in wave forms (full body orgasm without sex or copulation).  I instantaneously knew that there was much more to this relationship than I could imagine possible.

I never left after that fourth date – we moved into a new house 3 weeks later, engaged in less than 1 month, and our relationship flows effortlessly without arguments, tension, stress, or the typical roles people play.  It is what I had envisioned being possible – a communion so to say – that is not seen in this reality.  I’ve always had this deep knowing that I could have that, I just required the correct partner.  And I knew that when I revisited my checklist for a partner.  He checked off every single item on my “would like” list and my “would not like” list, and even added to my list. How does it get any better than that?

Nine months later, and we’re literally inseparable… we sleep together(bodies pressed up like magnets; one body moves, the other follows), eat together, cook together, work out together, enjoy friends together, work next to each other at the dining room table when not traveling, travel together, shower together, do healing work on each other, hike together, you name it… we do it together. Most people would be asking for “time apart” or “their own space”. Not us!  We enjoy each other thoroughly and can BE who we are with each other. I didn’t desire to ever get married because all I saw in this reality were people divorcing themselves to be with another person. I chose to never do that at age 18… which is why I put my career first.  Kumar has shown up to expand my life in ways I didn’t know were possible.  I don’t have to give up anything to be with him; I actually be more when I’m with him. What would a world look like if everyone could have that?

One tool that I’ve shared with Kumar is divorcing each other daily. We divorce all of the past decisions, judgments, conclusions, and expectations either of us have made so that we can create each moment and each day from a clean slate!  This tool allows us to live present with each other!

I’m ecstatic that we are now co-facilitating sex and relationship retreats together, co-authoring a book on relationshipping, and working with couples in private sessions to improve their relationship. I custom built my partner and would LOVE to help others custom build theirs!  So much more can be possible if you just open up to receive it!

Thank you for being the magnificent medium that allowed Kumar to show up in my life.  I will be eternally grateful for your contribution to my life!

From Kumar:
So here is my version of meeting my Perfect Partner on your website. I had been married twice before (my last marriage technically ended 6 weeks after getting married when she decided she needed to go "find herself"), both marriages I took time to heal and honor my partners and hold them in the sacredness they deserve for making me aware of my possibilities. Its one of the things I teach clients as a relationship coach is to choose not to be a victim but a creator of your own destiny.

I had done the Match.com thing and after getting too many emails from women who were looking for a 6', 175lbs, Adonis, who was 40 something, successful, never been married, never had kids, no ex's and wanted to sweep them of their feet and take care of them for the rest of their lives...I threw in the towel.

Then I checked out for a while and just did ME, I enjoyed my morning hikes with my dog and my sunrise meditation, after a while I realized that I had physical needs that needed to be fulfilled, so I joined an adult themed dating site, but the women on that site were about as unconscious as you can get. After 1 week I had 15 serious hits to my profile with women literally throwing their numbers at me and wanting to meet immediately. After meeting a couple of them and realizing that there is nothing conscious here, just people looking to fulfill their physical needs, I checked out of that.

I have to admit, I was a bit frustrated, why was it so difficult to find a woman who was conscious but had not divorced her sexual self in the sake of consciousness. I started meditating more and clearing everything that came up and refining my list. I decided I was not prepared to settle for just sex without the consciousness and was not prepared to just be with someone at a conscious level but without the sexual awareness.

How difficult was it to find a woman who was comfortable in her sexuality and welcomed it, and was also conscious and understood that the deeper you explore your sexuality with consciousness, the more conscious you become. So I had an ex who I dated a few years prior who had mentioned your site as a good place to start a quest, so I joined and upgraded. I sent out a couple messages to profiles that caught my interest.

I knew I was on the right track with your site because at least we had tons of things to connect on, unlike other websites where you struggle for commonness, plus I could speak my language of awareness and people would not go running for the hills...lol.

So about April I ran across a profile that stopped me dead in my tracks…here was an absolutely grounded woman who from her profile had her head on straight, had maturity beyond her years and from what I read on her profile…GOT IT!

I sent her an email and did not hear back, but I had detached myself from the outcome the moment I sent her the email, I went on living life for me, loving me and being ok with me. A few weeks later, I got a reply only to find out she was out of state…worse, she had just returned from Europe and was planning on going back within a few months.

We exchanged emails here and there over the next couple of months. In the mean time I was checking out! I was done, I was truly happy with me, I really didn't "need" anyone. I had tons of friends who loved me, an active social life, a great job, a great career and needed nothing else.

Just then Shelly emailed me and asked me to meet for coffee, I had just purchased a new house and had decided to downsize my life to keep it simple. I was remodeling the house, which was close to where she wanted to meet, so I agreed. When she walked in, I about fell off my chair…her eyes and smile were mesmerizing... she filled the room, her energy was amazing and I could tell by the way she dressed and walked that she had all the sexual confidence in the world…we talked for 2 1/2 hrs...I remember driving away thinking, WOW I just spent 2 1/2 hrs talking to myself!

We had a couple dates later and the rest is history. What was funny is that two days later we face-booked each other to only realized we had over a dozen common friends…wow! We had crossed each others’ paths a few times and know the same people but had never met...we were engaged a month later and are now planning everything around each other. We have done radio interviews together and hosted sex & relationship tele-classes...people keep showing up to remind us that they want what we have (whatever that is), and we remind them if they know what that is...we are being asked all the time to show up and show the world what is possible when you let down your guard, open yourself to being hurt, let fear go and just be you without divorcing any part of you for the sake of "being" in a relationship…we don't have a relationship…we have a communion!

Our goal is to step forth transparently and vulnerably for the world to see...we live in a society with 67% divorce rate, people don't even know how to be in relationships anymore…including the one with themselves. So we started a journey that is bigger than her and I to show up and remind others what is possible and give them the tools we used to find each other...we are awed and amazed every day, in complete gratitude for each other and our lives...and in complete gratitude for your site for bringing together, two aware conscious beings to the same place to rediscover what we already knew was possible.