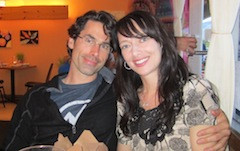 When you know, you really do know.

I wanted to write to you to share my success story and thank you for your help in bringing my partner, Eric, and I together.

I can see very clearly how my life has been preparing me to meet my 'match' and believe that we all have to do our work to get to a place where we are able to receive such a great love but your site was the final and divine piece of the path to bringing us together.

I have been using online dating sites to meet my mates for over 15 years....long before it was trendy or cool.  In fact, when I first started using them people thought I was crazy and that only really desperate people used them!  Little did they know that I recognized if you were very clear on what you were looking for it was an invaluable tool.  Over that period of time I've had 3 partners (not including Eric) and they were all long term and enriching and important.  None of them were meant to be the ones to completely commit to, however. They were all 'training grounds' of sorts to prepare me for meeting the love of my life.  And there enters your site.

At this point I was so committed to only communicating with men who were conscious, awake and heart-spaced individuals, committed to a life of love and learning so I wasn't even considering any other site than yours.  I think it took about a year or more to meet Eric, and I only went on one other date in that period of time but based on the quality of the men on that site I knew that when I found him, even if it took years, I knew he would be amazing.  And I trusted, of course, as well.  And then we connected.  And even though I had very high expectations, they've all been exceeded - 10 times over!

I'm not sure how much you want to hear about how special our connection is but the short story is we have both spent our lives preparing to meet each other and both came to the exact same place, at the exact same time, of wanting the exact same thing.  The seas parted, the skies opened, and your site was the divine bridge that finally brought us together.

I believe our first connection was January 2, 2014 and we were engaged April 15, 2014.  He lives in Ashland, Oregon and I live in Vancouver, BC and I will be moving to Ashland sometime next summer, where we will be married.

I have never been more sure of anything in my life and suddenly all the cliches are true!  When you know, you really do know.

I’ve been so happy with your site that I have referred many people to it. My recommendations don’t come easily as far as dating websites go. What I loved about your site is that it gave me a chance to really describe who I was, what my values were, and what I was looking for. I loved how I could even craft my own questions. The compatibility and sexual chemistry match aspect was useful too. I particularly liked the astrology details for the sun, moon, and rising sign for each person. Thank you for creating such a wonderful site.

So, here’s my story of Angie and I. What a gift it has been…

I had just separated from a past relationship around Christmas time, who incidentally I also met partly through Spiritual Singles, and I was considering how to look to develop new friendships in my life. I had several spiritual and healing groups that I was a part of but I was looking for some new connections. So I tried meet-up and some other sites. Nothing really panned out. Then I considered looking on spiritualsingles.com as I had good luck in the past finding a partner, I thought, it might also be helpful for discovering new friends with shared values and spiritual orientation. It was such a treat to meet so many people that were from all over the world that were interesting, kind, and with a soulful bent to them. During that time, I met Angie, she had clicked on my page and marked interested. I reached out to her to start a conversation.  She was looking for a relationship and I wasn’t. I also wasn’t looking for a long distance romantic relationship even if I would have been interested in starting a relationship as I had an experience in the past where it just didn’t work out with my having a son and needing to stay in the town I live.

However, I did notice that Angie was a Cancer. I swore, if I ever was going to date again, they would need to be a water sign. There is an element of flowing connection for me with those who are water signs, which is essential for me in relationship.

That being said, I was just interested in friendship upfront. After a month of lots of emails, Angie convinced me to consider that maybe there was more than just emotional intimacy for a friendship. So I reconsidered my original stance on the possibility of a long distance relationship. We set up a meeting at a hot springs that was halfway between our two towns for a few months in the future. After we set the date for that, things deepened between us. I fell in love with her even before I met her in person.

Well, you know what they say… you don’t really know until you meet in person. So I held my breath a little bit not knowing what it would be like once I met Angie in person. The week we met it was so precious. It rained the whole time. We only went out two times into the hot tubs. We stayed in our little cabin listening to the rain, talking, caressing each other, and relaxing into our relationship, no phones, no TV, nothing, just us. It was Divine. I remember writing a song during one of the days about how much of a gift it was. I was so happy to meet someone that I could share emotional connection, physical attraction, soulful relating, and spiritual union with. And she was a water sign! Later we discovered that her sun and my moon, both in Cancer lie on the same exact degree spot on the zodiac wheel – creating a beautiful balance of giving and receiving. I remember being so surprised that I felt our energy worked together. There was (and still is) a wonderful harmony.

After the initial visit, our relationship deepened. One day as we were texting, sharing our love for each other, I felt so deeply inside the desire to ask her to marry me. I was surprised at the feeling, as it was very early on in our relation but I followed it, and I asked her. I never thought I would have asked her or anyone to marry me via text, but there it was. Later we talked more about it and I felt my core illuminate like a column of light as I asked her again. I could feel in my asking her that it was inviting even more of the deep truth of my being to anchor and expand into my life. I knew it was right. (She said yes btwJ)

Since then, we have met in several locations on the West Coast. I’ve loved the traveling and I was surprised to see how well she and my son get along; it’s quite a gift for any single parent to have that happen.

The connection has continued to deepen between Angie and I. 6 months feels like a lifetime. We find ourselves marrying each other in stages. The big ceremony is set to happen next summer. I’m looking forward to seeing what the years ahead will bring to us. I have never been so sure of a relationship. It just feels right to be together. It feels like a reward for all of our internal work of healing our wounds, awakening, and learning to love ourselves. The skills I have learned in other relationships around communication and being able to repair and rebuild trust along with Angie’s similar skills are creating a situation where we rarely have conflict but at the same time we have in no way diminished our ability to speak honestly about how we feel, what we want, and what we need. In contrast to my past relationships, we rarely ‘process’ much, which is a whole new world for me. There is so much ease, joy, and enjoyment of life. We’ve even found an animal totem buzz its way into our life in multitudes of synchronicities, The Hummingbird. It has been a daily reminder of the sweetness of life that is now available to us. Thank you Creator! Thank you Divine Mother and Father. Thank you Maker.